Artist's creatures are ugly inside and out 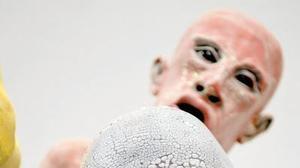 Woody Othello's new installation at Unit 1 gallery in Lake Worth is a living room filled with odd and grotesque creatures who fritter away their lives and dwell in mediocrity. One stoneware sculpture, a figure with black, saucerlike eyes, is sprawled on a section of hardwood floor, gazing at a gold watch. His skin tone is chalky gray and medicinal green, his toenails dark and gangrenous, his bald cranium enlarged and pointed. Another creature with jaundiced skin stands on an end table, joined by a pair of frowning, unscrupulous-looking cohorts with red and purple skin.

The living room is the site of Othello's solo debut exhibition, "It's Going To Be Okay," opening Saturday, Jan. 24. One creature near the entrance, a beer-bellied, pasty-skinned schlub named Ralph, is slumped in a beige kitchen chair, dressed only in a pair of white underwear. A family portrait-style photograph on the wall above him shows Ralph in a gray, button-down shirt.
"I just put a shirt on the same dude and added this cheesy family portrait background," says Othello, standing in the gallery on the Monday before the exhibition's opening. "My idea is to fill the wall with a bunch of goofy portraits of the same guy, just shot at different angles. That would be funny as hell."