Forget LA and NYC: This is the New Maker Hotspot 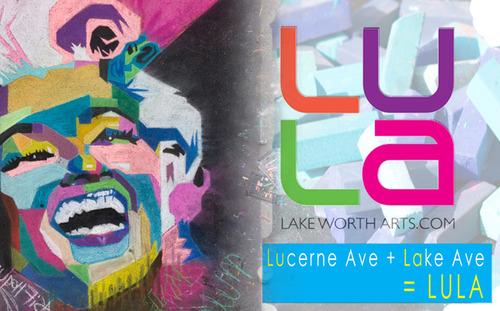 A small city in South Florida is an under-the-radar, up-and-coming hotbed of makers. Miami obviously has a huge arts scene. Locals know that Ft. Lauderdale does, too.

But Lake Worth, in Palm Beach County, is the one to watch. It's a city on the verge.

The Lake Worth Community Redevelopment Agency has received over $23 million in grants from HUD to improve blighted areas of the city as part of the Neighborhood Stabilization Program. They've used the money to purchase, rehabilitate, and demolish foreclosed homes and build live/work spaces for artists.

"My husband Nick and I live in The Urban Arts Lofts. We have studio space in the bottom and we live upstairs in a loft," says Ashley Nardone, who used to work at Anthropologie as a display coordinator (meaning an artist who makes window displays, store displays, and signage). Now set up in Lake Worth, she and Nick opened Seldom Seamed and became self-employed installation artists who build mind-blowing storefronts and creative displays for all kinds of events. "Once the city made these buildings, then builders and makers and artists moved in," she says.

LULA – the cultural Renaissance program in Lake Worth, cultivates engagement from local creators with maker-infused events and art-centered business programs. Lake Avenue and Lucerne Avenue, two one-way streets downtown (from which LULA gets its name), get closed off each year for a street-painting festival in which local artists create beautiful chalk murals on the streets.

This weekend, January 23-25, the city of Lake Worth will host Art Synergy 2015, a countywide effort to unify the arts. Also this weekend there's Art Palm Beach, Palm Beach's own little Art Basel, and the public opening of The Benzaiten Center for the Creative Arts, in the historic train depot, a building that had nearly been forgotten. The Benzaiten Center aims to provide a world-class fabrication center for creative folks in the community to realize their full potential. It'll have a full-service glassworks studio, a gallery and gift shop, and a metal works studio.

The Armory Art Center–a visual arts school and exhibition center based in an art deco building in West Palm Beach–recently opened an annex in Lake Worth, too. It just began classes in the historic Shuffleboard Court Building.

Lake Worth is just south of Palm Beach, land of the luxe. In only a few miles, the streets go from posh retail to a mecca of makers, where it all begins. The changes in Lake Worth have even sparked some controversy. Some say the mural on the Shuffleboard Court Building is more graffiti than art, and hardly a revitalization. But that hasn't stopped the local CRA.

The city has planned an arts-related hub at 1000 Lake Worth Avenue to offer office, meeting, gallery, education, and community space. Plus, Lake Worth's J Street has become a mini arts center. There's Flamingo Clay Studio, a non-profit artists co-op run by artist and activist Joyce Brown, Common Grounds Coffee Bar, with its sub-culture ambience and paintings by local artists on the walls, and Propaganda, a J-Street music venue and lounge. Also worth checking out in Lake Worth: Mc Mow Glass, Artisans on the Avenue, and the Lake Worth Art League.

"My husband and I are both South Florida natives," says Ashley Nardone. "We're seeing Lake Worth transform into a vibrant community of makers. The town has an old South Florida vibe and it's small enough that we can ride our bikes everywhere."

Read the article, and see more images on Yahoo!